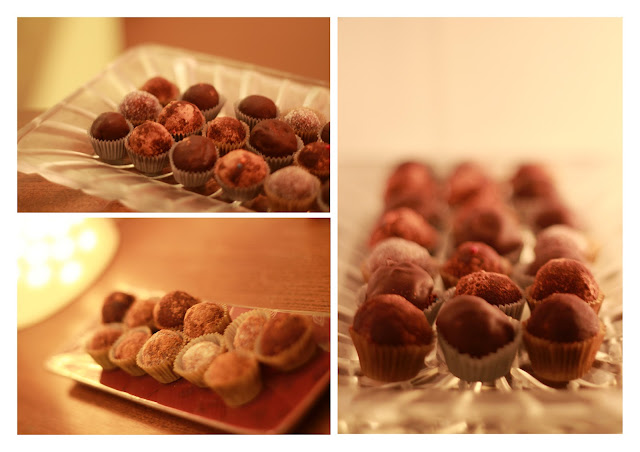 As the saying goes, sometimes the best things come in small sizes. Fortunately for me, being the lesser talented cook in the relationship, they are also easy to make and very useful for scoring the occasional brownie points with family. We have a penchant for entertaining, and take it very seriously - lists & menus are drawn up days in advance, and although my contribution is usually limited, this time I happened to be home during the afternoon when all the chaos action was taking place. The occasion was the anniversary of my in-laws and although there were already 2 desserts planned and in process, I decided that some amount of chocolate & alcohol was also in order.

Rum balls seemed like the perfect thing to do for multiple reasons. We had all the ingredients readily available, the lovely online lady suggested I would be done in a matter of minutes and much of the work could be done outside the kitchen, which looked like a war zone. So, even though this is traditionally a Christmas time treat, & we are approaching peak summer in Delhi, this combined two of the most potent entertaining ingredients in the world, what could go wrong? I got right to it.

I finely blended some whole almonds, toasted them - easy peasy till I realized I should have done it the other way round, but I assume it couldn't have made much difference. Next were the biscuits, also in the blender, till I had them in crumbs. Having access to all of my wife's awesome baking stuff was useful - measuring cups, cocoa, castor sugar - you name it, it was there. Added the honey (substituted for the originally suggested corn syrup) & the Rum (I used gold rum, not white). Gave the whole thing a little mixing and voila, I had the batter ready. These are no-bake, so they are essentially candies and I thought I was essentially done. I popped it into the fridge to let it set and become a little less sticky. I also found some 3/4" cupcake liner baking paper cups(there is probably a better way to describe them) that we had picked up from IKEA that seemed like the perfect receptacles. I had visions of guests squabbling over the last ones and comparing them to Anthon Berg liqueur chocolates..
For the Recipe, Read more »
Posted by Advisor at 8:04 AM No comments:

Communicooking has hit 4000 views today.
I think that is reason enough to celebrate. :)
Posted by Unknown at 12:49 PM No comments: 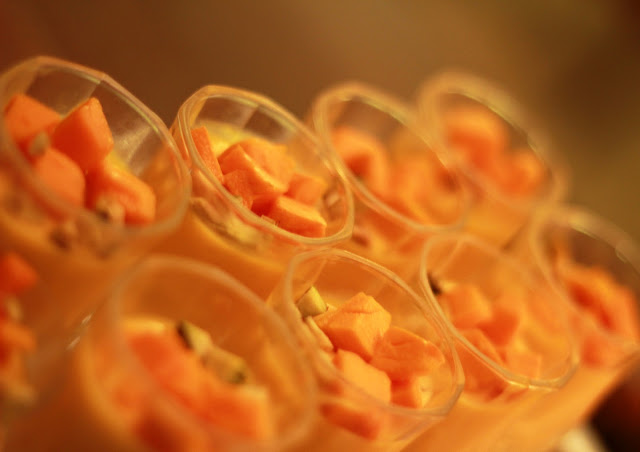 A king asked a sage to explain the Truth. In response the sage asked the king how he would convey the taste of a mango to someone who had never eaten anything sweet. No matter how hard the king tried, he could not adequately describe the flavor of the fruit, and, in frustration, he demanded of the sage "Tell me then, how would you describe it?" The sage picked up a mango and handed it to the king saying "This is very sweet. Try eating it!"

Summers are here.
The good part is that the layers are off- but more recently- I have discovered that this is my not so favorite time of the year. The peak of the allergy season, the health issues, and there is a dull limp in the air that just seems to bring everyone/everything down? Where is the freshness of summer like it used to be?

However, one of the nicer things about summer is the Mangoes. Luckily, being in Delhi, we get the best variety of mangoes through the year, and that is something I truly cherish about the summers. And, I am one of those people who can eat a mango a day to keep the doctor away! My childhood training from Dad, has me equipped to recognize the variety of mangoes available, the time of the year they come in and how best to eat them. We had a stash of wonderful alphonso mangoes, which I utilized quite aptly, if I may say so- in the form of a mango mousse. Alphonso mangoes come from the western India belt, and are known for their pulpy nature and a dark yellow colour. I have come to learn over many years, that the best use of an Alphonso is in the form of a milk shake. In more recent times, I have used it for a mango cheesecake and icecream too- truly, it is a fruit to be used in its pulpy form.

We had a formal dinner for my K side of the family- and I planned to utilize the fruits available for desserts. Since it was my parents anniversary as well, A cake was planned along with some sort of a shot dessert helping. I went in for the strawberry shortcake, for its fanciful look, and decided to use the mangoes for a mango mousse. The recipe is adapted from the Chocolate Mousse here. Original can be found here. I have never had such wonderful feedback for a dessert that was literally made in about 20 minutes. Even people who don’t have a sweet tooth- could not stop raving. This dessert is a definite recommendation for a light sweet bite!
For the Recipe, Read more »
Posted by Unknown at 7:32 PM 6 comments: