I often wonder what sort of background music would be appropriate for the bits in life where we are doing really awesome stuff. Maybe you should let this music play while you read this post about the awesomeness yesterday.

The reason why T is not writing this post is that she writes this blog for the joy of cooking. She loves the process, the mixing with hands, the transformation of ingredients. She enjoys the thousand little subtleties that make her cooking different from everyone else. It is a relaxation, a therapeutic release that results in something beautiful. Something that can be taken up at will and at a convenient time.

Yesterday, though, was an event. It called for good food, to be prepared in large quantities, for lots of people. The people mix was reasonable eclectic - a little less than half were vegetarians, some of whom would not even have eggs - some would enjoy their drink and eat later, some would want to be fed as soon as they entered. It also called for birthday cake, which we could have easily outsourced along with the rest of the food - a recommendation of mine that was put down almost immediately - There would be cooking - lots of cooking and T would do it.

So we fixed a menu for 20 people and here it is:

And to eat it with..
Vegetable Biryani
Methi Parantha

Not for the faint of heart, is it? Wait for it though, there's more 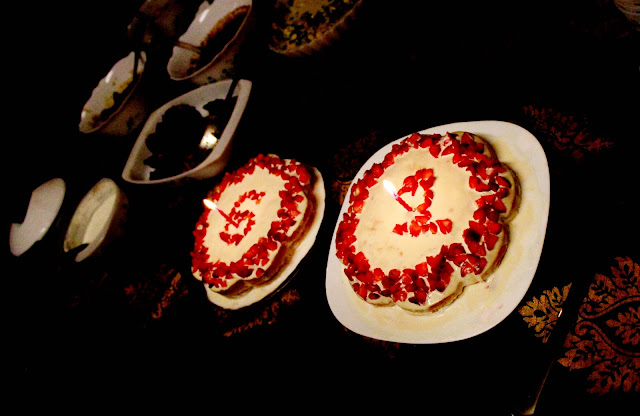 That's right, Two. So this menu not only encompassed almost 20 distinct items, each of which required individual preparation and then some - it also required some drinks to wash them down with. However, since I simply assembled the ingredients as per individual taste, therefore I won't include that bit here.

Sooo, 20 items to make, 8 hours notice, limited help from staff, no interference from family & T created a magnum opus. By 9pm, as our first guests arrived, the final touches were still being put in place. By 1am, we had all our guests in a pleasant state of tranquility & bonhomie - the kind that can only be induced by good food, plenty of drink and sweet, delicious dessert

The eccentricity of post dinner conversation included everything from ghalib and fruit shopping and pays testament to one thing. The ability of good food and drink to bring together people who rarely meet and have little in common. Kudos to T for making it happen.
Posted by Advisor at 3:57 PM