Not like it wasn't going to happen, but at times, 2013 seemed like it would go on and on and in some ways I am glad it's over. T & I have both had an emotional, eventful and fruitful year. We are perhaps wiser, probably a little grayer. We moved houses and we worked really hard to expand our respective offices. We vowed to be healthier. We spent far too little time on holiday. I turned 35. Yup.

As is our wont, we decided to wrap up the old year with a home full of friends. This was not going to be the epic feast that T can put up when 20 or so people are craving to eat her home-cooked food. No, this one was a last minute - your place, that guy's place, our place kind of thing. We eventually insisted that everyone would come to our place with everyone insisting they pitch in for the food and booze. It meant that we didn't have to drive anywhere in this ridiculous cold, and also it would give me a chance to try my buttered rum recipe that got me a reputation on 2012/13 eve. On a wider audience.

Winters in Delhi are meant for sipping Kaanji sitting in the sun and for hot drinks at night. As much as I loathe summer veggies in Delhi (frozen methi! Yay!), what you eat and drink should vary seasonally. While I stress that cocktails need to be cold, a hot drink in the depths of winter, shared with friends around an angeethi is a spectacular thing. So this time round, instead of packing the fridge full of ice, I pulled out the thermoses (thermae??). It would be hot buttered rum and mulled white wine. I was still in the process of finishing up when the first batch of people turned up, bringing with them 4 bottles of red wine, which meant I could also make mulled red wine.

The recipe for buttered rum is deceptively simple. Consisting of mostly butter and sugar, it can throw you off as being as easy as putting it together at the last minute. Nope. There's an intriguing mix of spices that you need to get just right and leaving the whole mixture to mature for a little while makes all the difference. David at 12 Bottle Bar has written far more lucidly on the recipe than I can hope too, so it's best you navigate over if you intend to make some for yourself. It's a fabulous drink and as long as you pour it in espresso mugs or shot glasses, it'll disappear pretty quick. It gets cold too fast for you to pour anyone a long drink, so keep a thermos handy and you'll be topping up drinks every 10 minutes or so.

Mulling wine is far easier in my opinion, but requires more adaptation. You need to have the necessary spices at hand, but I doubt an Indian kitchen will be hard pressed to have cloves, cinnamon, nutmeg, cardamom. An orange is useful, but orange bitters will also do the trick. Let the peel of the orange and the spices steep in some simple syrup in a pan till it's simmering. Take it off the heat and add your bottle of wine. Let that steep for about half an hour. Return the pan to the heat to warm up the drink and serve. The quantities of the spices vary enormously based on the wine you are adding, so you'll have to improvise with experience. After mulling several dozen bottles, I can safely admit there is a lot to learn.

Of course, T didn't leave the food to chance. There were her signature ham and rocket rolls, a recipe that will(should) soon be on this blog. We deployed a mini fondue, courtesy the other Ak, filled with soft melted cheese, surprisingly complex to put together, but remarkably rewarding for the crudites loving vegetarians. Main course was Mexican do-it-yourself wraps with many complicated components that, I am sure, will form the basis of a substantial post in the future. Dessert was courtesy SG, her newly acquired love, the Delhi-Famous Banofee Pie from Big Chill, all 50 million calories of it, demolished substantially by the audience in a worryingly short amount of time. I sneaked some away for the next day, a fact bemoaned by many who were inquiring about it into the wee hours.

The Night wrapped up in the Morning. While T was catching up on sleep via a much deserved afternoon nap, I decided to storm the kitchen and make something I have been craving ever since we had them in Sri Lanka almost 3 years ago. Buttermilk Scones. 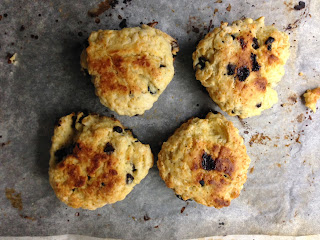 Scones are weird. Neither bread, pastry, teacake or biscuit, they are somewhere in the middle when it comes to consistency and also when it comes to eating them. Hot from the oven and spattered with fruit preserve/jam, they are wonderful like no other baked produce. Most are uncertain on how to make it or what to make of it, much less pronounce it, so here is a little traditional poem to explain.

None the wiser? Don't worry, because whatever it's called, if made well, it's absolutely splendid. As with my previous recipe on this blog, I turned to my lovely online lady. Stephanie is an excellent instructor for those us not gifted with natural cooking talents and tends to explain all the steps with little helpful tips that make a world of difference to the final outcome. Just listen to what she says and you should be fine. After making an absolute mess of the kitchen and my clothes (wool & flour don't mix), I finally popped a baker's dozen worth of heart shaped scones in the oven. I departed from the recipe only by adding some blueberries and chocolate chips. Because everything is better with a little chocolate. 20 minutes later, the kitchen was smelling heavenly, the scones were being eaten and all was well with the world. 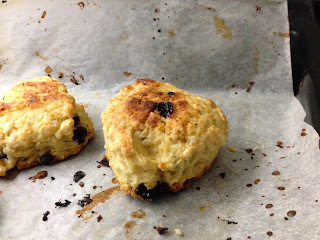 Of course, having access to T's baking pantry is what makes my cooking escapades feasible. I can't imagine trying to put together the ingredients/equipment required to make these scones, or anything else for that matter. It takes years worth of accumulation, wisdom, replenishment, research and selection. Above all, it takes a passion for excellence and a love for what you do, two of the very many things I love about her.